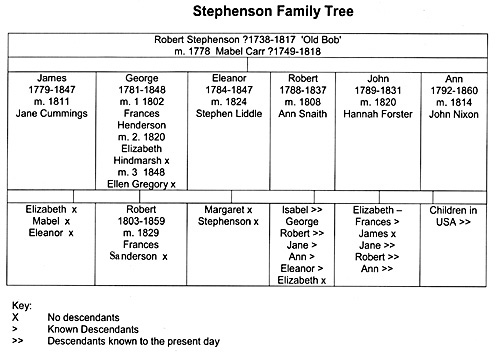 Click here or on the image above to open a larger version.

George Stephenson's father, "Old Bob" , possibly came from Scotland, while his mother Mabel came from Ovingham, a village in the Tyne Valley, near to Wylam, Northumberland. George was one of six children. The four sons: George, James, Robert, and John - all of whom started work in coal mines - were usually employed above ground carrying out the more responsible and better-paid duties such as brakesmen on the winding engines. Of the daughters, Eleanor married a railwayman, whilst Ann married and emigrated to the USA.

George , the second son, was born in 1781 at Wylam, Northumberland. He married three times: firstly to Frances Henderson in 1802 by whom he had a son Robert in 1803; then to Elizabeth Hindmarsh in 1820; and finally to Ellen Gregory in 1848. His early working life was spent as a brakesman, then in collieries maintaining stationary engines. He also took work mending clocks and shoes. Together with his son Robert and Nicholas Wood, he succeeded in developing a miner's safety lamp (the Geordie) which competed with the one invented by Sir Humphrey Davy (the Davy). He advised on routes for most of the early railway companies in Britain and on many abroad. His uncompromising style and dealings as a shrewd businessman brought him fame and notoriety in equal measure. His early experiences had led him to favour stationary or heavy engines, and from 1818 to 1828 his interest in wheeled locomotives was mainly promotional. His surveying talents were those of a visionary rather than of an expert, and he relied upon others for the more detailed operations. Regrettably, some of his achievements have been exaggerated by writers eager to immortalise the legend that he had become in his lifetime. Nevertheless, his name will forever be associated with the creation of the railway system in this country. By sheer force of personality, and as a tireless promoter of railways, he achieved worthy and undeniable greatness. He died in 1848 at his home - Tapton House - and is buried in trinity Church, Chesterfield.

James , the eldest son, became an engine driver on the Stockton & Darlington Railway when it opened in 1825. He drove Locomotion No. 1. In 1830 he moved to George's new colliery at Snibston on the Leicester & Swannington Railway, where he was appointed superintendent. He stayed until his death in 1847.

Robert, the third son, worked as a driver on one of Blenkinsop's engines at Kenton & Coxlodge Colliery railway near Newcastle upon Tyne. He surveyed and constructed the Hetton Railway, after which he worked on the Stratford & Moreton tramway. Finally he was appointed engineer of Pendleton Colliery in Manchester, and held this post until his death in 1837. He had four daughters and a son, George Robert, who was in practice as a railway engineer, and who inherited one third of the family estate upon his cousin Robert’s death in 1859. George Robert then managed the business of Robert Stephenson & Company.

John , the youngest son, worked in coal mines at Gateshead before going to the Robert Stephenson & Company in Newcastle upon Tyne. His daughter Ann recalled seeing the Rocket being built. His two sons were educated as Civil Engineers. He was killed in an accident at the works in 1831.

George Stephenson's son Robert was born in 1803 at Willington Quay, near Newcastle upon Tyne. He ranks alongside Brunel and Locke as one of the three great Victorian railway engineers. Many of his structural works were innovative and on a grand scale. His early pioneering locomotives and subsequent long-boilered engines formed the basis for all latter-day steam traction. He deserves particular credit for many of the early achievements - the success of the experimental Rocket, and the development of the Planet and the Patentee, the first locomotives to be built in numbers. The Stephenson link-motion; a mechanism to operate a valve gear, carries his name. In 1823 he became Managing Director of Robert Stephenson & Company, and engines from the South Street works in Newcastle upon Tyne were exported all around the world. Despite professional differences of opinion between father and son, and early problems with the business while Robert was abroad, the bond of affection between the two men remained strong. Occasionally their letters and actions revealed times of great strain - perhaps inevitable when business was a family priority. Robert married Frances Sanderson in 1829, and became an MP in 1847. He died, without an heir, in 1859, and was greatly mourned. As a deserved mark of honour he was laid to rest in Westminster Abbey, a privilege accorded only one other engineer - Thomas Telford. (Photo below)

Stephenson family information, including a contact name/email address for genealogical research matters, can be found on the Robert Stephenson trust Genealogy Page.

Durham Mining Museum - transcription on the DMM website of a short biography of George first published in Colliery Engineering - November 1930.

Durham Mining Museum - transcribed biography from 1869 on the DMM website about the steam locomotive including information about George. (original source not quoted by DMM)

Back to top of the page | back to Fact File intro | On to next page in the Fact File series.